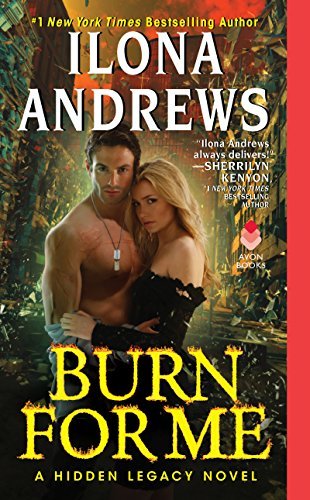 Cover for Burn for Me
Hidden Legacy is a Paranormal Romance Series written by husband and wife team Ilona Andrews. Books #1-3 in the series focuses around Nevada Baylor. Novella 3.5 and books #4-6 (#6 not yet released) focus on Catalina Baylor, Nevada's younger sister. While there's no official word, it's generally believed books #7-9 will focus on Arabella, the third Baylor sister.
Advertisement:

In 1863 the Osiris serum was discovered, a serum that granted people extraordinary magical abilities. The serum changed the course of human history. People that have previously married for status, money, and power now married for magic; strong magic would grant them this and more. Magic users were separated into five ranks: Minor, Average, Notable, Significant, and Prime. A century and a half later families with strong hereditary magic have formed Houses. Houses often feud with each other, and sometimes turn deadly.

Nevada Baylor is the head of and major field operative for a family Private Investigation Agency. She possesses a rare magic that allows her to tell when someone is lying, an ability she keeps secret from anyone who isn't her family. When her parent company forces her to take on a high-risk case in which she must track down and return to his family a highly dangerous, highly impulsive Prime who has every cop in Houston burning to shoot him and can burn someone to death with the snap of his fingers, she must rely on unlikely allies, (the fatal, irresistible, good looking kind) to keep her and her family safe. This eventually becomes the first step in not only her romance with the infamous Connor 'Mad' Rogan, but in defeating a conspiracy to overturn the government of Texas and possibly ignite a second American Civil War.

Several years later, Catalina Baylor, now head of not only House Baylor but the family investigation agency, finds herself dealing with a new arms race involving deliberately bio-engineered strains of the Osiris serum, which involves repeated involvement/clashing/romancing with her former teenage crush, Alessandro Sagredo, who turns out to be far more mysterious and downright lethal than his reputation as a party boy and social media influencer would suggest.

Diamond Fire - A Novella that takes place between Wildfire and Sapphire Flames. It's considered 3.5, as it introduces at least two characters who show up in Catalina's trilogy, and was also issued as a physical paperback.

All the following are available for free at Ilona Andrews' website