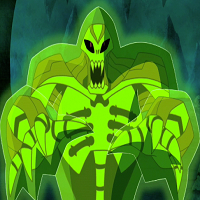 Should we mention this was the first episode?
Advertisement:

Quite possibly the first Scooby-Doo series that has aimed to be genuinely scary (with Zombie Island being the only other Scooby work as dark), with the first episode being Darker and Edgier than most Scooby-Doo series in itself. The "monsters" go far beyond scaring people or kidnapping witnesses. The final episode itself takes the cake.

Nightmare Fuel subpages, being Moments subpages, are Spoilers Off pages. You Have Been Warned.