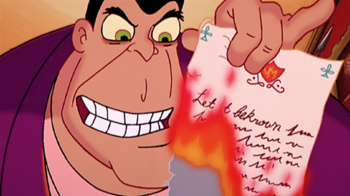 "Unfortunately, like your little plan, it's about to go up in smoke."
Advertisement: