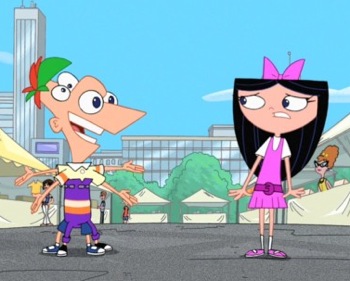 Aren't you a little too old to think this picture is scary? YES! YES WE ARE!
"Okay, this is another CG element with the balloon, and I have to say, that's one of the most disturbing images I've seen."
— Jeff "Swampy" Marsh, referring to Balloony

Expect unmarked spoilers as Spoilers Off applies to Moments pages.

Media with their own pages:

open/close all folders
Season 1
I, Brobot

Day of the Living Gelatin

Invasion of the Ferb Snatchers

Monster from the Id

Phineas and Ferb: Save Summer