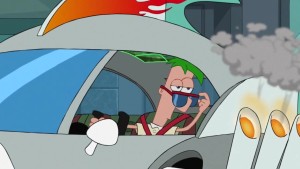 Yo' diggin' my ride from outta' space...
Advertisement:

Ready for the Bettys

Get That Bigfoot Outa My Face!

Journey to the Center of Candace

Leave the Busting to Us!

Does This Duckbill Make Me Look Fat?

One Good Scare Ought to Do It!

Season 2
Interview With a Platypus

Isabella and the Temple of Sap

We Call it Maze

The Secret of Success

The Doof Side of the Moon

The Belly of the Beast

Mommy Can You Hear Me?

A Phineas and Ferb Family Christmas

Season 4
For Your Ice Only

The Return of the Rogue Rabbit

Tales from the Resistance: Back to the 2nd Dimension