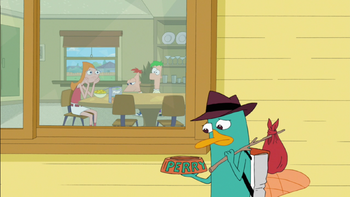 Isabella: Hey, Buford, are you...sweating out of your eyes?
Buford: ...No! I'm just cryin'!
Advertisement:

"Aren't you too old to be crying over a show about kids passing their summer with crazy things?"
"Yeah, *sniff* yeah, we are..."

Tip of the Day

Attack of the 50-Foot Sister

Not Phineas and Ferb