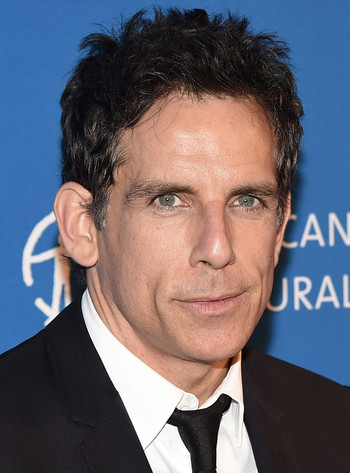 "I don't devalue comedy as compared to drama. Not one bit."
Advertisement:

After beginning his acting career with a play, Stiller wrote several mockumentaries, was a cast member on Saturday Night Live (for all but three or four episodes during the show's 14th season), and was offered two of his own shows, both entitled The Ben Stiller Show. After acting in a few films, Stiller had his directorial debut with Reality Bites, and has since written, starred in, directed, and/or produced over fifty films and television shows. His films have grossed more than $2.1 billion, with an average of $78 million per film. In 2008, he starred in the film Tropic Thunder, which he also co-wrote, co-produced, and directed.

Stiller is a member of the comedic acting brotherhood colloquially known as the Frat Pack. He seems to have a thing for self-deprecation; his Jerkass As Himself roles on Extras and Curb Your Enthusiasm paint him in a hilariously unflattering light and his characters in his most successful movies thrive on his characters being humiliated, whether he is protagonist or antagonist. A lot of his characters also tend to have a hilarious Berserk Button. He also appeared as the minor character Tony Wonder (did somebody say "Wonder?") a Large Ham magician, on Arrested Development and notably created roles for his legendary parents in several of his films.

Heterosexual Life-Partners with Owen Wilson, whom he's collaborated with numerous times on-screen; Wilson once said that Stiller was more defensive about Wilson's signature crooked nose than he was. Also really good friends with Tom Cruise; Stiller helped revive the latter's career with a scene-stealing turn in Tropic Thunder and has done affectionate parodies of Cruise multiple times, most notably on Celebrity Jeopardy! and while hosting the MTV Movie Awards.

Zoolander- Dead to Me, Boy

Zoolander to is dead to his father, after his dad sees him playing a mermaid. Sorry, that's merman!

Example of:
I Have No Son!

Zoolander- Dead to Me, Boy

Zoolander to is dead to his father, after his dad sees him playing a mermaid. Sorry, that's merman!