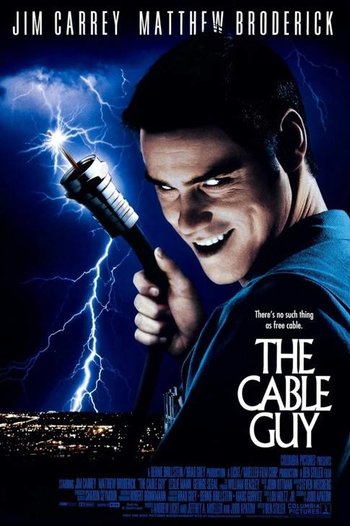 Once you're hooked...you're his.
"I can be your best friend, or your worst enemy. You seem to prefer the latter."
— Chip Douglas
Advertisement:

After his girlfriend Robin (Mann) flips out and gives him the boot, Steven Kovacs (Broderick) gets the very last thing he needed to fill the void in his life: an incredibly bizarre cable installer named Chip Douglas (Carrey) who latches on and insinuates himself into Steven's life. To his credit, Chip does lots of favors for Steven, up to and including helping him win back Robin, but his odd, off-putting and sometimes illicit behavior (including buying Steven a prostitute and then making it up to him by beating the crap out of Robin's date, and later getting him an overelaborate entertainment system via "connections"... which ends up being stolen) proves too much to take and Steven eventually has to tell him to take a hike. Things quickly turn sour after that, and Steven finds out just how weird his "pal" really is when Chip begins stalking him and pulling various strings to try and ruin his life.

Much of the pre-release hype around the film was Carrey's $20 million(!) payday for his role...and then the hype soured as the Black Comedy surprised many critics and audiences, compared to his lighter star-making roles of the previous two years. The resultant backlash meant that it would be, and still is, incorrectly remembered as Carrey's first flop as an A-lister. While it wasn't the home run the studio was likely expecting, it did make back its budget — after worldwide receipts were added in it grossed over $100 million. And it's also picked up something of a following.

Has nothing to do with Larry the Cable Guy.