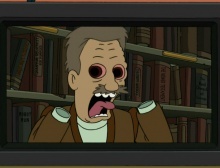 "It's not fair!"
Advertisement:

Welcome to the future, at least as seen through Futurama. Please be warned of unmarked spoilers abound. Which makes sense, as this is the future.

Or, to put it another way, Moments pages are Spoilers Off. You Have Been Warned.