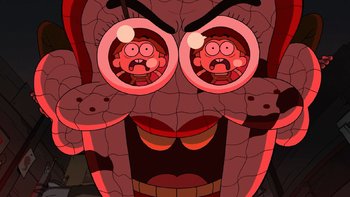 HIYA, CRICKET!!! WHO'S THE DUMMY NOW???!!!
Although Big City Greens is considerably more light-hearted than even some of its contemporary Disney Channel shows, at times the show will unexpectedly introduce themes that are rather horrifying and dark, be it confined to the kids' vivid imaginations or actual trouble the characters get into around town.