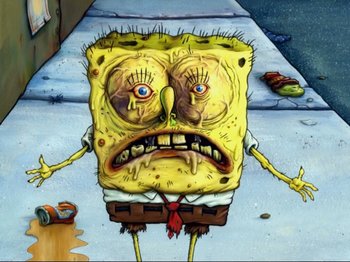 "Is there something wrong with me?"
"Is SpongeBob SquarePants supposed to be terrifying?"
— Kenneth Parcel, 30 Rock
Advertisement:

SpongeBob SquarePants, with the over-twenty years that it has been on the air, has gave light to the dangers of living under the sea...

SuperSponge
Revenge of the Flying Dutchman

Don't worry, it grows back!