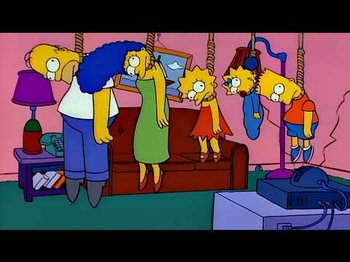 Simpsons! What are you doing hanging around in these parts?
Advertisement:

The annual Treehouse of Horror Halloween Special of The Simpsons, while mostly Played for Laughs, still has had its fair share of disturbing images, horrifying scenarios and Downer Endings over the years.