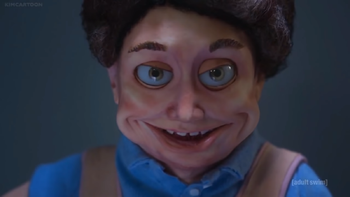 Only forty seconds in and you're greeted with this. And it only gets worse from there.
The Shivering Truth is filled to the brim with Uncanny Valley Deranged Animation. Surreal Horror, Mundane Horror, and Mind Screw can be found in every episode.