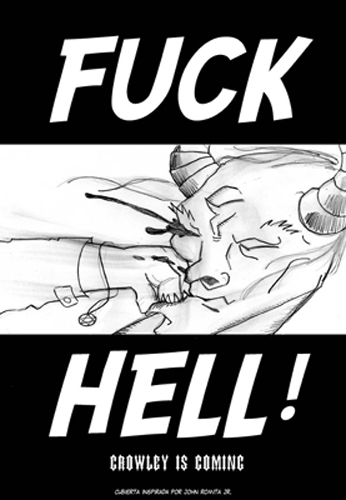 A spanish webcomic centered in the adventures of an Anti Anti Christ turned supernatural detective/exorcist and his ghostly sidekick.

Fiona Gibbons was a succesful writer with quite the normal life... until she suddenly realizes she has been killed by a demon and now she is a ghost. But don't worry! She's gonna get help. But what would happen if the person who is in charge of helping her is The Anti-Christ? Fortunately, he doesn't want to be the AntiChrist. He is Christian D. Crowley, paranormal detective and demon slayer, and he looks like an ordinary man... except for his supernatural powers, of course. Together, They Fight Crime!... or try to stop the Apocalypse, or wathever.

This spanish webcomic shifts between humor, horror and a little Gorn and even if the art is quite amateurish, it's getting better with time.

You can read it (if you know spanish, there isn't an english traslation... yet) here