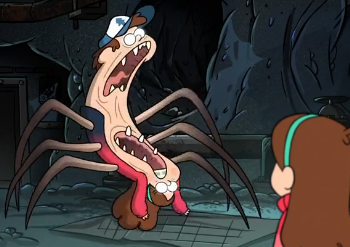 "SHOULD I BE ONE, OR THE OTHER? HOW ABOUT BOTH?"
"Heheh, good luck sleeping tonight!"
— Soos, "Into the Bunker"
Advertisement:

Gravity Falls is a town known for the paranormal and supernatural oddities discovered every day. It also happens to be the location of a Disney show, so there’s about to be a lot of those moments that really show just how dark this show can get. And considering the length of this page, it's amazing that this show managed to get shown on Disney Channel.

open/close all folders
General, Shorts, and Dipper's Guide to the Unexplained

Dipper's Guide to the Unexplained

Legend of the Gnome Gemulets

Legend of the Gobblewonker

Weirdmageddon 3: Take Back The Falls

A different form, a different time.
I'M WATCHING YOU NERDS!