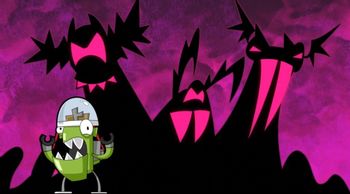 "Live the terrifying, mythical, GLOWKIES!!!note This would've been scarier if it wasn't for Rokit's Large Ham acting...
A colorful, creative world like Mixels couldn't have any nightmare-worthy stuff in it, right? Wrong...
Advertisement:
open/close all folders
In General
Season 1
Season 2
Other Media