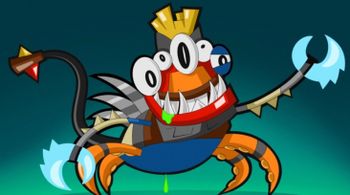 Helloooo ladies!
Given the fact that the show is entirely based on action and comedy, it shouldn't be too surprising to find hilarious moments that can happen.
Advertisement:
open/close all folders
In General
Season 1
Season 2
Breaking News

LEGO.com added this feature on their Mixels site as a part of the S7 update. They're updated weekly, and gives as much hilarity to them as the actual show.