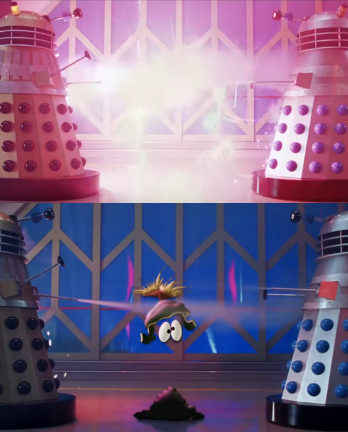 Oh dear...
"You are putting him back right?! Because I can't go back to Los Angeles with duck soup!!"
— Kate Houghton, Looney Tunes: Back in Action
Advertisement:

Animated characters in Non-Fatal Explosions usually just get charred, but a really big boom (or really hot fire) will do more.

The victim's entire body turns to ash and crumbles into a dozen pieces, except for the eyeballs, which bounce into the mess. Then another character will produce a broom and dustpan, and sweep up the ashes, eyeballs and all. Or a (relatively intact) arm reaches from the ash, produces a broom and dustpan, and the character sweeps himself up. Of course, all will be well a few seconds later.

Also see Ash Face, where the explosion leaves the victim with a blackened face.