Western Animation / Return to the Planet of the Apes 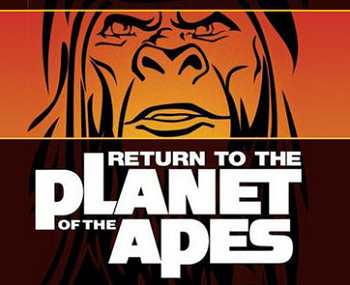 In the year 1976, a small space shuttle with a three man crew is launched as part of an experiment in relativity, achieving a speed where one hundred years and multiple days goes past in almost no time at all for them. But then their ship develops a malfunction and goes blasting towards an alien planet, hurtling rapidly through time to the point that, when they crash-land in a lake, over 2000 years have passed for them. Setting out in hopes of finding civilization, they discover themselves on a strange world of caveman-like humans and advanced, intelligent apes... which are not too welcoming towards the intelligent humans.

Airing on NBC, the series premiered on September 6, 1975 and was broadcast until September 4, 1976, although only thirteen episodes were produced.