WARNING: Nightmare Fuel subpages, being Moments subpages, are Spoilers Off. You Have Been Warned! 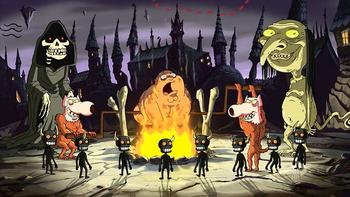 The wheels on the bus go round and round...
This show started out as sort of a Denser and Wackier take on The Simpsons, which of course already has enough regular Defanged Horrors. In recent years (especially after getting uncancelled for the second time in 2005), it's started going into South Park territory.
Advertisement:
open/close all folders
General
You'd think that be enough, but no. The spike bends, putting his body next to a rocket engine, which activates, essentially roasting him. Finally, in the aftermath, we see Ernie's impaled, cooked body floating through the ocean.... and his eyes open. At THIS point, the viewer actually feels sympathy for Ernie, because regardless of his feud with Peter, he didn't deserve what he just went through.

Stewie: My God, look at all this devastation!
Brian: What the hell happened?