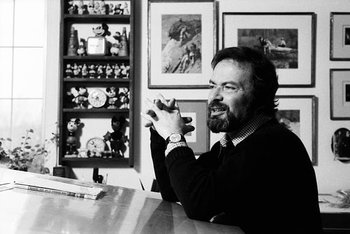 "I write books that seem more suitable for children, and that's OK with me. They are a better audience and tougher critics. Kids tell you what they think, not what they think they should think."
Advertisement:

Maurice Bernard Sendak (June 10, 1928 – May 8, 2012) was an illustrator and author of children's books; best known for his international hit Where the Wild Things Are (1963), which was adapted for film twice. He started work as an illustrator in the very late 1940s, and began writing as well towards the end of The '50s.

Sendak's work was sometimes controversial. Where the Wild Things Are received complaints that it was too grotesque and scary for young children (although few of these complaints seemed to come from actual children, who typically enjoyed it), and his In the Night Kitchen has been banned or censored several times for its mild (and utterly non-salacious) use of nudity. Despite— or perhaps because of— all this, he became one of the most popular and beloved children's writers of his era.

In addition to his art and writing, Sendak was an advisor for the Children's Television Workshop (creators of Sesame Street), and worked with Jim Henson on an adaptation of Sendak's Bumble Ardy stories for the show. He also worked on the animated special Really Rosie, which was based on his books, and Seven Little Monsters.