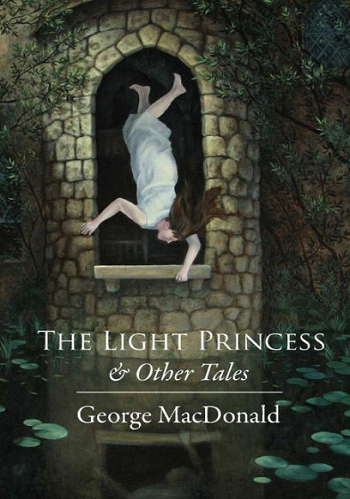 The Light Princess is an 1864 tongue-in-cheek fairy tale written by George MacDonald.
Advertisement:

Once upon a time there was a King and Queen who desperately wanted a child, and were eventually blessed with a baby girl. But while arranging their daughter's christening, the King forgets to invite his sister, Princess Makemnoit, a horrible witch. Out of spite, Makemnoit curses the Princess to live without gravity.

Because of this, the Princess spends her life floating in the air, unable to touch the ground and always dangerously close to being carried off into the sky. Moreover, there's no gravity to weigh down her soul, either. She never thinks seriously on any topic, cannot be made to empathize with people, and never cries.

The only thing that seems to remedy this, is a nearby lake the Princess loves to swim in, which miraculously returns her gravity. After sneaking out to it one evening, a Prince happens across her and, believing she's drowning, swims out to rescue her. By the time he realizes his mistake, he's already fallen in love with her. Though the Princess is incapable of being serious about anything, least of all love, she consents to spend time with him while she swims at night.

Unfortunately, Makemnoit discovers the Princess' love of the lake and curses it to drain. It's said that the only way to refill it is if a man is brave enough to give his life by plugging the hole with his body until it's full again. Fearing the Princess will die of sadness if the lake is not restored, the Prince volunteers to sacrifice himself, on the condition the Princess sits beside him in a boat till the deed is done.

Though initially pleased that the lake is returning, when the Princess sees the Prince drowning she becomes distraught and pulls him out. When he finally wakes the next morning she falls to the floor and weeps with joy. Love has broken the curse. The two marry and have many children—none of which ever lose their gravity.

Noted children's author Maurice Sendak illustrated a version, which was released in 1977.

In 2013 it was adapted into a musical by London's National Theatre, with the book by Samuel Adamson and music by Tori Amos.

The Light Princess provides examples of: