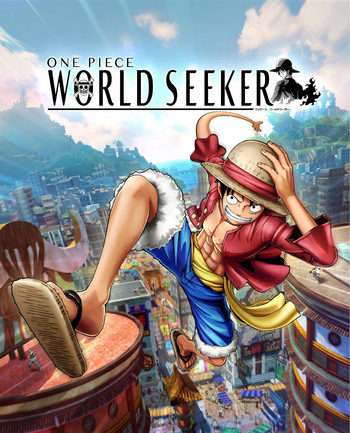 One Piece: World Seeker is an open world game for the PC, PlayStation 4 and Xbox One based off the One Piece manga.

The story sees the Straw Hats coming upon a new island dubbed Prison Island to raid its treasure vault, it is ruled by a Marine warden turned scientist named Issac who seems to wield cybernetics and robotics. However the initial attempt goes south when it turns out there is no treasure and the crew are forced to split up while Luffy battles Issac before escaping himself. In the midst of this, Luffy befriends a girl named Jeanne who leads an Anti-Marine force and seeks to take the island back from Issac.

As stated, the game is an open world one where players can go wherever they choose. Taking on missions, fighting enemies and leveling up Luffy's progression as the adventure goes on, which will allow him to access more of his move set to get to further areas and deal more damage to enemies.

The game was released in March 2019, Japan getting it on the 14th and US and Europe getting it the following day (Though as usual, only in the original Japanese dialogue and subbed).

Naturally DLC followed. One was an area quest expansion in which Luffy investigates an island that can apparently reverse aging note It's just a fanservice one really. Later followed by three episodes that let you play as certain characters. The first features Zoro, the second features Sabo and the third features Law.

and the Opening Cinematic