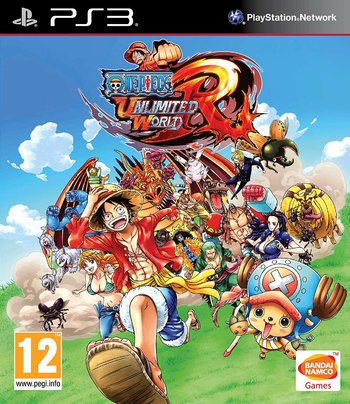 One Piece: Unlimited World Red is a 2014 video game based on the manga/anime franchise One Piece, third in a series (Unlimited Adventure and Unlimited Cruise being its predecessors), set after the two year Time Skip, and features an original story with characters developed by series creator Eiichiro Oda. Back when Blackbeard broke out those really dangerous criminals during the War of the Best two years prior, one particularly scary individual managed to slip out: Patrick Redfield, otherwise known as "Red the Aloof," a pirate who was on par with the likes of Pirate King Gold Roger and Edward "Whitebeard" Newgate, though he admittedly left less of a mark on history than either of them. His rep is well founded, as he's seen taking out a full platoon of Marines, seemingly with the aid of Vice-Admiral Smoker and Admiral Aokiji. So, of course, with a major threat out there on the seas, the Straw Hat pirate crew are drawn into conflict with him. Not that they realize it at first. Their adventure begins when they accidentally fish out an odd raccoon creature from the ocean and agree to take him home...

The game is a fairly standard action/adventure game where you take Luffy and his crew on an adventure through many areas and against many foes taken from major arcs in the series storyline (with an in-game justification of these areas and characters being copies created by Redfield himself). Each level has the player take a team of three Straw Hat Pirates, each with their own battle style, through an area crawling with marines, angry wildlife, and other pirates, all the while gaining experience points and leveling up, until they face a boss character at the end, each one being a major Arc Villain from the franchise. Along the way they will pick up various materials and pieces of junk which can be used to expand the services provided in the games Hub Level town, or power up the Straw Hats themselves, which is a staple of the One Piece: Unlimited games.

Also comes with an Arena Mode, which is notable for being loosely based on the show's then current Tournament Arc, with longtime villain Doflamingo as the final boss.

It was released in America on July 2014, on the Nintendo 3DS, Playstation 3, Playstation Vita, and Nintendo Wii U (both download only, but the Vita version's Physical copy is exclusive to GameStop). In 2017, an updated Deluxe edition, with all DLC included, has been released for the Playstation 4, Nintendo Switch, and Steam.