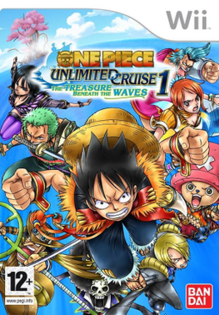 One Piece: Unlimited Cruise is a video game based on the popular manga/anime series One Piece. It is the sequel/successor to One Piece: Unlimited Adventure, and the second entry in the Unlimited series of sorts. Like all games in the series, it follows its own storyline. The Straw Hats participate in a strange "game" of sorts, and have to explore several islands, overcoming obstacles and challenges to obtain treasures, aided in this regard by a small, cute creature named Gabri, who opens new pathways for the crew.
Advertisement:

Like its predecessor, the game is a fairly standard action-adventure game. You must take the Straw Hats through several islands filled with enemies to defeat, items to collect, and bosses to defeat. Said bosses and enemies are clones of the crew's old friends and foes, created from the Straw Hats' memories. You can level up the crew's moves and make them learn more by repeatedly using them in battle, and you can use the stuff you collect to have Usopp craft all kinds of bells and whistles, Chopper create healing and damaging items, and Sanji cook up various meals that enhance the crew's life and SP bars. There's also a Versus mode, where you can fight team battles against another player or the CPU; you can even play as the other characters and standard enemies in that mode.