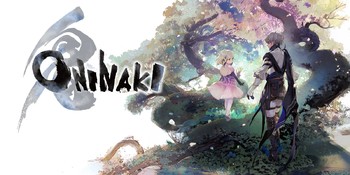 Oninaki (Oni no Naku Kuni) is a JRPG by Tokyo RPG Factory, the same developers responsible for I Am Setsuna and Lost Sphear. It is a notable departure from their previous works, being an Action RPG instead of a turn-based game with an ATB battle system.

The game follows Kagachi, a "Watcher" who serves as a shepherd of lost souls. In Oninaki's world, those who die are reincarnated into a next life, unless they are weighed down by grief and regret, whether it be their own or those of their loved ones. The Watchers' role is to sever these bonds as to allow these spirits to pass on peacefully, creating a culture where the mourning of the dead is discouraged.

The story centers around Kagachi's encounter with Linne, a mysterious young girl with no memory of her past, who's being hunted by the Night Devil, an ominous swordsman who pursues her for unknown reasons.

It was released on August 22nd, 2019 for Playstation 4, Nintendo Switch, and on PC through Steam.