Video Game / One Punch Man: A Hero Nobody Knows 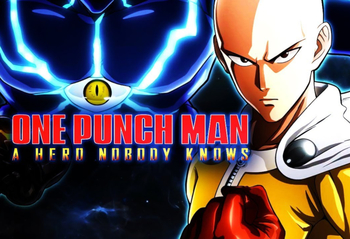 One Punch Man: A Hero Nobody Knows is a fighting game based on the mega-popular One-Punch Man series, developed by Spike Chunsoft and published by Bandai Namco. It released on Playstation 4, Xbox One, and PC in February 27, 2020 for Japan while the other countries got it a day later.

The game is a three-dimensional 3-vs-3 tag team fighting game with the cast of the anime series's first season, but with one important distinction: if Saitama is selected as a member of the player's team, he will not be immediately usable in the fight, because he's running late to the fight. A timer is put in place that counts down the time remaining until Saitama arrives, with perfect guards and combo attacks shortening the time needed until he can be used. Once Saitama arrives, he can One-Hit KO his opponents.

The game's story mode follows the events of the anime through the perspective of a player-created character who was saved by Saitama in a chance encounter and, inspired by him, starts the journey to becoming a hero.