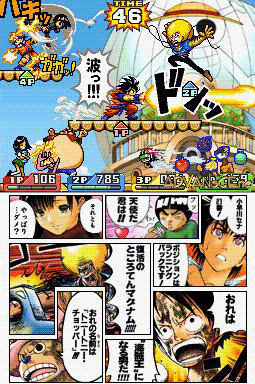 It's every bit as crazy at it appears.
Advertisement:

Jump Super Stars is a 2-D Platform Fighter game for the Nintendo DS published by Nintendo in Japan in 2005. It gathers many of the popular characters from Weekly Shonen Jump in a Super Smash Bros.-style battle royale. In most stages, your objective is to simply knock out your opponents more often than they KO you, either by depleting their Hit Points or knocking them off the stage. However, some missions require you to collect the most/all of a certain item, and a few (and many unlock goals in otherwise normal stages) have more unusual goals.

The unique feature of Jump Super Stars is how a team is built. Each character has from 1-8 koma (manga panels), each of a different size and shape. The touch screen has a 5 x 4 grid to place koma on, and the koma you place there form your deck. The size of each koma determines if it is a help (1 panel; provides a bonus to adjacent characters), support (2-3 panels; performs a single attack) or battle character (4+ panels; the playable characters). You must have one of each type of koma in your deck. Most fighting is done with the basic buttons, but using support characters, switching battle characters and activating some special attacks require touching the appropriate koma, while the battle takes place on the upper screen.

In 2006, a sequel, Jump Ultimate Stars was released. In addition to adding game modes and many new characters, each fighter got at least two basic attacks and a powerful finisher. The unlock system was also much improved; you earned points during battle, which you could spend to unlock characters, stages or other features. You could also play online via Nintendo WiFi Connection.

In 2009, a Spiritual Successor of sorts was made, Sunday VS Magazine: Shuuketsu! Choujou Daikessen, with another set of manga characters from Shueshias's rivals, Kodansha and Shogakukan.

A second Spiritual Successor, J-Stars Victory VS, was announced in 2012 for Weekly Shonen Jump's 45th anniversary on the PS3 and Vita. Said game was unexpectedly released worldwide in 2015 as J-Stars Victory VS+ for PS3, Vita and PS4.

Manga and playable characters represented in this seriesnote Characters introduced in Jump Ultimate Stars will be italicized:

Many of the character-specific tropes (such as Big Eater and Cloud Cuckoo Lander) from these series also appear in this game as well.