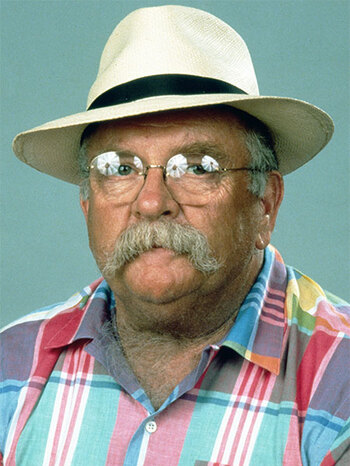 "G'morning. Ahm Wilford Brimley, an' I'd like ta talk to ya for a few minutes about diabeetus..."
Advertisement:

Instantly recognizable due to his large mustache and rotund physique, the Utah native first got involved in the film business in the '60s, being initially employed as a horse shoer and occasional stuntman. His first acting role came in 1970, when he was cast as recurring character Horace Brimley in The Waltons. Following that, he appeared in several movies and TV series. Notable film roles include Ben Luckett in Cocoon and Dr. Blair in The Thing, where he appears mustache-less. From 1986–88 he starred in the NBC drama series Our House.

He's also well-known on the Internet for his appearance in a series of memetic commercials for Liberty Medical Diabetic Supplies, in which he infamously pronounces the disease's name as "diabeetus". Ironically, he had previously been a spokesman for Quaker Oats, where he proved that he knew how to get a kid to do the right thing and eat its goddamned oatmeal

He passed away on August 1, 2020 while hospitalized in Utah for kidney disease.