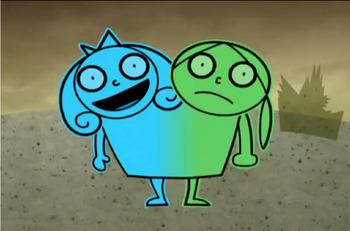 Basically the entire premise of the show could be this. An Enfant Terrible has taken over/traumatized a town using homemade monsters to the point that no one has the guts to go up against her. She is now hell bent on murdering another girl just because she wanted to be friends with her, and the only thing keeping this little girl from getting killed is her uncanny obliviousness and naivety. Black Comedy indeed.