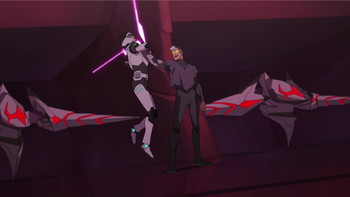 Haggar toying with one of Shiro's worst fears.
Advertisement:

It may be a reboot of a merchandise driven 80's franchise, but damn if this show doesn't have some seriously scary moments.

The Rise of Voltron
Return of the Gladiator
Fall of the Castle of Lions
Tears of the Balmera
Advertisement:
Return to the Balmera
Rebirth
Crystal Venom
Collection and Extraction
The Black Paladin

Launch Date
Shadows
Clear Day
Knights of Light, Part 2
The Zenith
The End is the Beginning