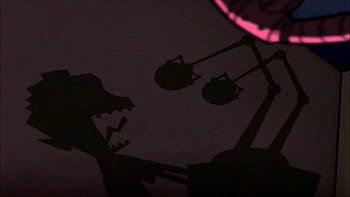 Eye Scream, you scream, we all scream for one of the most family-friendly Nicktoons!
Invader Zim, despite not lasting that long, managed to create so many horrific moments for a children's show that it's widely agreed to be the darkest cartoon Nickelodeon has ever created, making The Ren & Stimpy Show look like Sesame Street by comparison. Many episodes are so horrifying that it's a miracle that they even aired at all. What do you expect when you get the creator of a comic in which the protagonist is a serial killer to make a kids show?
Advertisement: