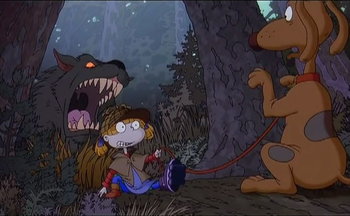 Angelica had no idea how correct she was for bringing Spike along...
This is probably the darkest and most nightmare inducing of the whole Rugrats franchise. The whole idea of toddlers being lost in the forest. This brings the series' inherent Fridge Horror to its utmost seriousness: this show is a long line of incidents in which helpless and naive infants are neglected to wander off on their own.