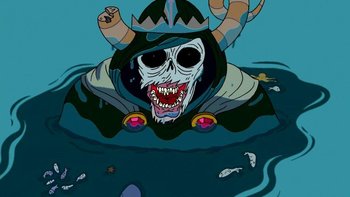 "Aren't you cold?"
"Just talked to the creator of Adventure Time, Pendleton Ward (@buenothebear). He said that he'd be happy if the show gave people nightmares."
— A tweet

What time is it? Not the time to give us nightmares, that's for sure!

Adventure Time was easily one of the darkest shows Cartoon Network have ever come up with in The New '10s. When the series moved into Darker and Edgier territory, some episodes managed to show really disturbing (and somewhat depressing stuff, even by the standards of a children's show.

"All The Little People"

"A Glitch is a Glitch"

"The Party's Over, Isla de Senorita"