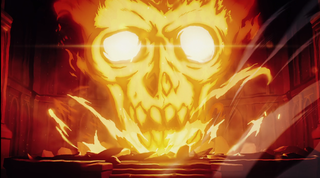 "What have you done to my wife?!"
What else is there to say?

Alucard: Oh, the world will still be here, Belmont. Trees will still grow, birds will still sing, animals will still hump away in the undergrowth... But you won't be here. And you won't be here. None of you. The sun will still set, but you will not see it rise. There will be only Dracula, and his war council, and the hordes of the night... He writes in great books, you know? He hews the covers himself from oak and wraps them in the preserved skin of the people who he hated most. And he writes plans, I've seen them. Ideas for darkening clouds and making them as permanent in the air as the frost of the north. Great strange flying machines that pull shrouds across the sky to block out the sun. Imagine it; a world without humans under endless invented night. And Dracula in his castle, his revenge so horribly complete that there is nothing left to do but look out over a world without art or memory or laughter and know that he did his work well. That he did it all for love.