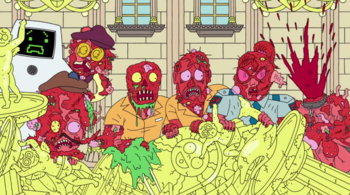 "A typical day in Superjail."
Superjail! has great animation, a kick-ass opening song, is more colorful than a box of Crayola crayons, is quite humorous, and its main character, The Warden, is an adorable megalomaniac, Psychopathic Man Child (imagine Willy Wonka running a prison facility). Then... near the end of each episode, a four- to five-minute-long fight scene takes place, amounting to what can only be described as "candy-colored ultra-violence on some of the most illegal hallucinogens/weed you can imagine." Basically, it becomes so demonically gruesome that if you don't like seeing complete carnage, RUN. If you don't, you will need a full transfusion of bleach into your veins to purge the bacchanalian brouhaha and a thousand palate cleansers. The show's body count rises easily into the thousands.