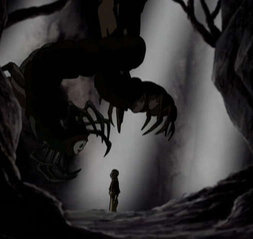 "It's been a long time since I've added a child's face to my collection."
Advertisement:
open/close all folders

Spoilers Off applies to all Nightmare Fuel pages. You Have Been Warned.

The Siege of the North, Part 2

City of Walls and Secrets

The Avatar and the Fire Lord

The Day of Black Sun, Part 2: The Eclipse

Sozin's Comet, Part 3: Into the Inferno