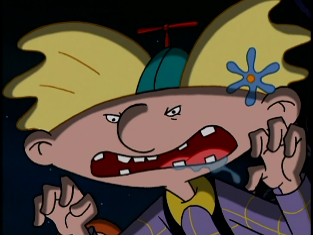 Well, it wasn't like Cousin Arnie was creepy enough already. Good thing it was All Just a Dream.

Hey Arnold was mostly a Slice of Life affair, but episodes focusing on Hillswood's Urban Legends and ghost stories were their own kind of creepy. Especially because whilst two of these episodes ended with the story being debunked, others weren't quite so straight-forward...