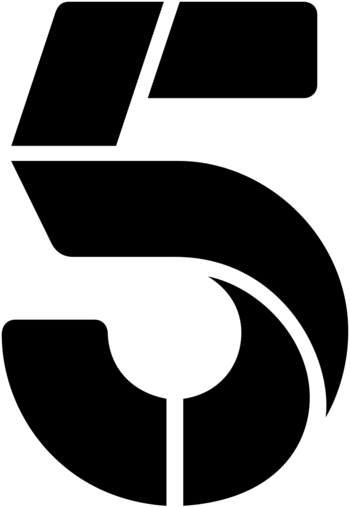 Channel 5, known as Five from 2002 until 2010 before reverting to its old name, was the last national analog terrestrial television broadcaster to be launched in the United Kingdom. It went on air in late March 1997, starting with an exclusive Spice Girls video.

Britain's UHF transmitter network was originally designed to transmit four networks over most of the country. 5's frequencies had to be squeezed between the existing frequencies, often at lower power to avoid interference, and in some parts of the country its signal was weak or nonexistent. In addition, the frequency at which it was broadcast could cause interference with VCRs, leading to people around the country having to retune their VCRs. In order to increase its availability in these areas, it became the first terrestrial network to duplicate its programming on satellite. Today it is available on all digital platforms and analogue in some areas.

Unlike The BBC, ITV and Channel 4, Channel 5 was not organized by the British government. Although it uses public airwaves, and is therefore subject to public service broadcasting restrictions, Channel 5 has not had so many restrictions placed on its output as the other terrestrial channels. It went through a period of Development Hell in the early 90s with various bids considered and rejected — one of these was a joint venture between Thames Television (then recently kicked out of ITV thanks to Executive Meddling brought upon by Margaret Thatcher) and Canada's CHUM Limited; if they'd been successful, a chain of stations modeled after CHUM's Citytv in Toronto would've been launched (and there is footage

of Thames chairman Richard Dunn showing off his Citytv swag at Speaker's Corner). The Citytv influence remained during the channel's early years, mostly through 5 News, which was basically a British clone of CityPulse (anchors standing up in an open newsroom set, bold graphics, brash music, streetside studio).

On the flipside, Channel 5 is home to the Milkshake! slot which airs in the morning before 9am in the UK. Peppa Pig was arguably the most watched slot among preschoolers in the UK when it was airing on the channel, even giving CBeebies a run for it's money. Even after Peppa Pig ended, the repeats on the slot still draws a considerable amount of preschooler audiences to the channel.

If you're at home on a weekday afternoon you're likely to see a Lifetime Movie of the Week as the afternoon movie (There was formerly a UK Lifetime channel, but it didn't run movies and ceased broadcasting in March 2021.)

Although some relics of this sordid past crop up every once in a while (the late night schedules are now mostly devoted to sport and Super Casino), Channel 5 is now best known as the British home of a number of U.S. crime dramas, including every component of the CSI-verse (with which it had a severe case of Adored by the Network).

However, Channel 5 loves procedural dramas and is infamous for not showing any real loyalty to shows that don't have "CSI," "Law And Order" or "NCIS" in the title. Most of the other shows in that last sentence were dropped before they ended, with only Charmed managing to find another free-to-air channel to finish its run.

Another notable show that Channel 5 aired was Angel — when Channel 4 let it go after its disastrous handling of the first season, leaving the second season buried in a graveyard slot, and handling the third season almost as disastrously before burying the fourth season in a graveyard slot. Five also famously paid over the odds for Joey, a show which gave them one of their highest-ever audiences for the first episode...and then sank without trace. Currently, Channel 5 is now the home of Big Brother, which was also picked up from Channel 4.

In recent years the channel has also become home to some well-researched and written documentary series about British history, engineering, cuisine and architecture. It is also home to All Creatures Great & Small (2020), which is quite a bit of a departure from the rest of the channel's original programming, being a feel-good drama that can be watched by the whole family. In February 2021, a 4-part series called The Drowning debuted with 6.1 million viewers for the first episode. The Drowning bypassed All Creatures Great and Small to become Channel 5's highest rated show since 1 September 2020.

It has two digital offshoot channels, "5USA" and "5*" (Five-star). The former shows a lot of U.S. imports, while the latter depends largely on Home and Away and Neighbours (although this also airs several American series). Like the flagship channel, they are also prone to cutting loose non-cop shows, such as Archer and Breaking Bad (although they did find other homes).

Channel 5 was formerly owned by the RTL Group, who own a number of other European channels, but was then sold owned by British newspaper baron Richard "Dirty" Desmond's Northern and Shell, owner of the Daily Express and Daily Star, plus a few more, shall we say, "adult" satellite channels. This ownership explains the undue prominence given to Channel 5 shows by the aforementioned papers. In 2014, Desmond sold the channel for £450m (or US$760) to US-based media company Viacom (the first time ever that an American media company has owned a British free-to-air television network), who have pledged to increase the budget for original programming - the channel has only aired one drama, the semi-improvised Suspects in four years. 5-branded channels are a part of the UK lineup of Viacom-owned streaming service Pluto TV.

With the re-merger of Viacom and CBS in 2019, this makes 5 the sister network to CBS in the US (and half-sister to The CW), and sister to Network Ten in Australia.

Should not be confused with the 1980s UK home VHS distributor of the same name.