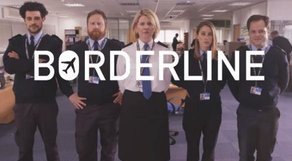 Northend Airport. An extremely small time airport in the middle of nowhere.

With maybe two flights a day if they're lucky, the hapless staff are free to mill about and chat about their day. Like ex-DJ Tariq, criminally un-hip boss Linda Proctor, bumbling Scotsman Grant and all around buffoon Clive.

The show is notable for its "Retro-scripting" writing style. The cast was given a general outline of a plot instead of a script, and improvise their lines from there.

Became available on Netflix in 2016.