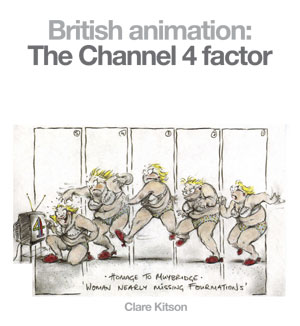 Clare Kitson's 200 book about Channel 4 animation. Illustration by Joanna Quinn.
When Britain's Channel 4 began to form, complete with a remit emphasising offbeat and experimental work, a band of animation enthusiasts jumped on board to ensure that their beloved medium was given recognition. Amongst the first of these was Derek Hill, who declared that "Animation has been abominably abused by television. Let's do it right."
Advertisement:

Channel 4 began broadcasting in 1982, and throughout the eighties and nineties it proceeded to dismantle the Animation Age Ghetto — along with the animation genre ghetto, and probably several other animation ghettos — by showing a tremendous variety of animated short films. A lot of these were existing works from around the world which the channel had bought the rights to, but many more were commissioned by Channel 4 itself. During the nineties these were screened as part of an Animated Anthology called Fourmations.

The single person most closely associated with Channel 4's animation is Clare Kitson, who became the channel's commissioning editor for animation in 1989 and eventually left in 1999. Channel 4's commitment to animation waned throughout the early twenty-first century, but the era left a mark on British animation which remains today.

Note: because of the sheer amount of animation commissioned by Channel 4, the list blow is restricted to works with their own pages.