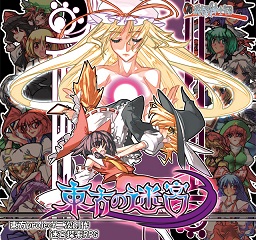 Touhou Labyrinth (also called Labyrinth of Touhou) is a fan-made RPG starring the cast of Touhou Project. It draws heavily from dungeon crawler RPG titles such as Etrian Odyssey, with a heavy emphasis on exploring a huge dungeon filled with many complicated floors. Aside from its dungeon crawler roots, it also features numerous shout outs to not only the Touhou Project series, but also many other video games and anime.

The Excuse Plot is that a Negative Space Wedgie appears over the Scarlet Devil Manor; and everyone in Gensokyo leaps to blame either Reimu or Yukari; the two people tied to boundaries. There's actually one other person heavily tied to boundaries in the series. Intent to do...something, anything about it, everyone rushes in and starts firing first and asking questions later. In other words, another day in Gensokyo.

The original game features 20 floors to explore and up to 32 characters to recruit. The Plus Disk expansion added another 10 bonus floors filled with even more challenging battles, as well as 8 additional characters. The Special Disk that was released later includes both the original content and the Plus Disk, and aside from a few gameplay tweaks, its most notable contributions are a new soundtrack and the option to use customized character portraits.

The game's story isn't particularly innovative or deep, but no one would expect it to be, given how often characters break the fourth wall. Still, there is a surprisingly large amount of depth to be found in the game; it's merely concentrated in its battle system. The game uses an action gauge similar to that of many earlier Final Fantasy games, with each character taking turns selecting abilities from a unique list of 2-5 spells. While individual characters may not possess many spells on their own, the player has access to up to 12 characters at a time, with 4 characters in the active party and 8 waiting in reserve to be swapped in at will. Making judicious switches while micromanaging each characters' active gauge is key to achieving victory against the game's many challenging boss fights.

For more information, check out the game's wiki page

on the main Touhou Wiki.

A sequel to this game, Labyrinth of Touhou 2, was released in 2013 during Summer Comiket 84. It retains the similar humor but more elements from dungeon crawlers, such as passive skills and item crafting. A Plus Disk was made around the end of 2016, and was translated in early 2019.

A third game, Labyrinth of Touhou 3, has been announced and is currently in development, though very little else is known, and there's no clear release date yet.

Labyrinth of Touhou 1 contains examples of:

Labyrinth of Touhou 2 contains examples of: