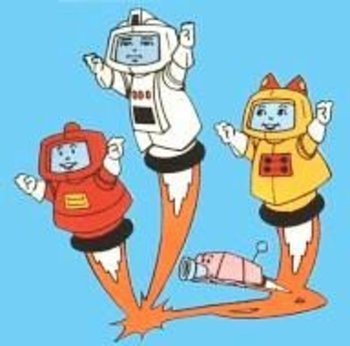 The Telebugs is a British cartoon from the 1980s about the adventures of three robots with televisions for heads.

The Telebugs were a hi-tech trio of merry monitored robots created by absent-minded Professor Brainstrain. These robots were, in the professor's own words, 'Pwogwammed to help people in twouble', but more specifically to combat the new threat of computerized villains and advanced adversaries springing up around the country.

The Telebugs' leader was a white-shelled droid called Chip. He was a calculation robot, able to process data and statistics at a phenomenal rate. Yellow-shelled Samantha was a hi-tech monitor and tracking device. Then there was Bug, the red robot programmed to acquire video footage and pictures. Bug came with a sidekick called Mic, a mobile independent camera.

The Telebugs worked for the local tv station run by the ill-tempered Mr McStarch. Their main adversaries were mad Baron Bullybyte and his Dragon Sister Magna. Bullybyte was in possession of an evil computer creation called Angel Brain. This wicked trio cropped up numerous times during the three Telebugs seasons. There was also Arcadia, a juvenile computer criminal who controlled an army of little evil robots.

In the course of the first season, Professor Brainstrain creates a fourth black shelled Telebug called Zudo. Unfortunately, Zudo's wires get crossed and he sets off on a wild rampage through the English countryside.

The Telebugs contains examples of: