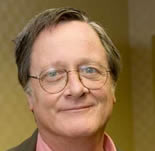 Timothy Thomas Powers (born February 29, 1952) is an American science fiction and fantasy writer. His breakout novel was The Anubis Gates, published in 1983. Other novels include Declare, Dinner at Deviant's Palace, The Drawing of the Dark, Earthquake Weather, Expiration Date, Last Call, On Stranger Tides, The Stress of Her Regard, and Three Days to Never.

Many of his works show arcane forces at work in the backstage areas of history, revealing the "real" causes and motivations behind historical events.

They also tend to be populated by body snatchers, identical twins, clones, time-travelling duplicates, and other kinds of Doppelgänger — Powers has said in interviews that he finds something powerful and worrying about the idea of meeting a person who looks and acts just like somebody you know but isn't, and many of his works have a scene of that kind. Some of them invert it, with a character meeting a complete stranger who turns out somehow to be somebody they already know; it's not any less creepy that way around.

On Stranger Tides became the basis for the fourth movie in Disney's Pirates of the Caribbean series, as well as being an inspiration for the Monkey Island series of games.

Interesting historical note: During the 1970s, Tim Powers spent a lot of time hanging out with Philip K. Dick.

Works by Tim Powers with their own trope pages include:

Other works by Tim Powers provide examples of: