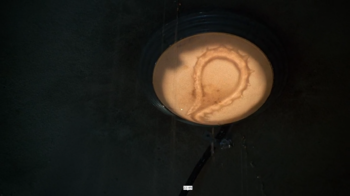 "It, it just doesn't live in water. It is water, taking shape only when it attacks, like it did when the hurricane backed seawater into the plumbing."
Written by David Amann
Directed by Rob Bowman
"If the sea is where life began - where our ancestors first walked ashore - then who's to say what new life may be developing in its uncharted depths."
— Fox Mulder
Advertisement:

Mulder and Scully travel to Florida in the middle of a hurricane to investigate the deaths of a couple and their son. As the storm worsens, they end up trapped in an apartment with an injured police officer, an unstable man with an attachment to his gun, a pregnant woman and her boyfriend, a petty thief, and a Sea Monster hiding somewhere in the pipes.

Dales: Anyone for water?
Mulder and Scully: No!