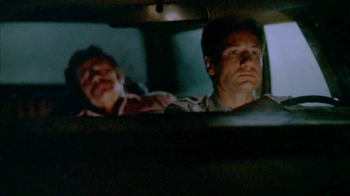 "You shut up and drive, you understand?" note Is that Walter White and Hank Moody in a car together?
Written by Vince Gilligan
Directed by Rob Bowman
"Crump? Is this what happened to your wife? This same thing? If you stop moving, you die? I think I saw this movie. Why didn't you tell anybody? Why didn't you tell the police?"
— Fox Mulder
Advertisement:

Mulder is kidnapped by a man (Bryan Cranston) whose head will explode if he doesn't keep driving west.