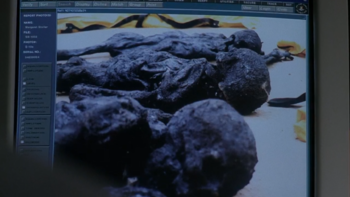 "I could never have scripted the events that led us to this. None of us could."
Written by Chris Carter & Frank Spotnitz
Directed by Kim Manners
"With all the blood on my hands, I couldn't kill the mother of my own son, a woman I never even loved. My colleagues never knew, focused as they were on the new threat - the faceless alien rebels who'd burned our doctors alive..."
— Cigarette Smoking Man
Advertisement:

The reappearance of Cassandra Spender marks a turning point in the fortunes of the alien conspiracy.

"If you don't kill me, it all starts. There won't be any stopping it. I am the one. You have to shoot me... Please!"
Feedback

Will Mulder put down an important woman before the loud knocker enters to stop it? Tune in next week!

Will Mulder put down an important woman before the loud knocker enters to stop it? Tune in next week!