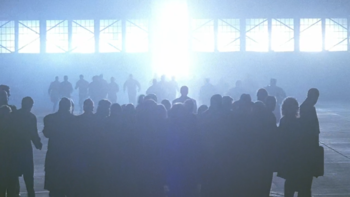 "This isn't supposed to be."
Written by Chris Carter & Frank Spotnitz
Directed by Rob Bowman
Mulder: [Cassandra]'s the first, isn't she? She's the first successful alien/human hybrid.
Marita: If she is... and the aliens learn a hybrid exists... colonisation of the planet will begin. With no stopping it.
Advertisement:

Mulder learns the truth about the Syndicate's extraterrestrial collaborations, just in time for the Syndicate to give up the hybrid Cassandra to the alien colonists.

Spender: I know more than enough about your past. Enough to hate you.
Cigarette Smoking Man: Your mother was right. I came here hoping otherwise. Hoping that my son... might live to honor me... like Bill Mulder's son.