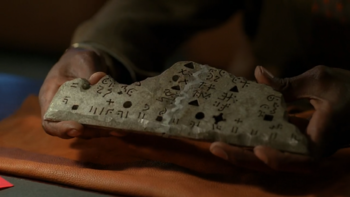 "He claimed it contained a message - not only of his Mars theories but the very meaning of human existence."
Written by Chris Carter & Frank Spotnitz
Directed by Rob Bowman
"It holds everything. Don't you see? All the mysteries of science; everything we can't understand or won't explain, every human behaviourism - cosmology, psychology, everything in the X-Files - it all owes to them. It's from them."
— Fox Mulder
Advertisement:

An artifact found in West Africa implies that aliens have had a hand in human evolution and history, and also seems to be doing something to Mulder's brain.

Advertisement:
"It's the same."