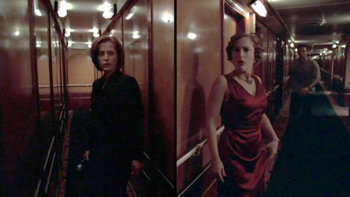 Die Wahrheit ist irgendwo da draußenTranslation "The truth is out there somewhere" in German.
Written and directed by Chris Carter
"This ship's been caught in something called the Devil's Triangle. It's some kind of time warp - a rift in space."
— Fox Mulder
Advertisement:

Mulder investigates a luxury passenger liner that mysteriously appears on the edge of the Bermuda Triangle. Once on board the ship, Mulder finds himself in the year 1939 as Nazi soldiers are fighting the British crew for control of the ship.

Several of the people on the ship just happen to look identical to important people in Mulder's own life. Scully's counterpart is a tough-talking undercover OSS agent in a red cocktail dress, while the Cigarette Smoking Man's counterpart is the leader of the Nazis.